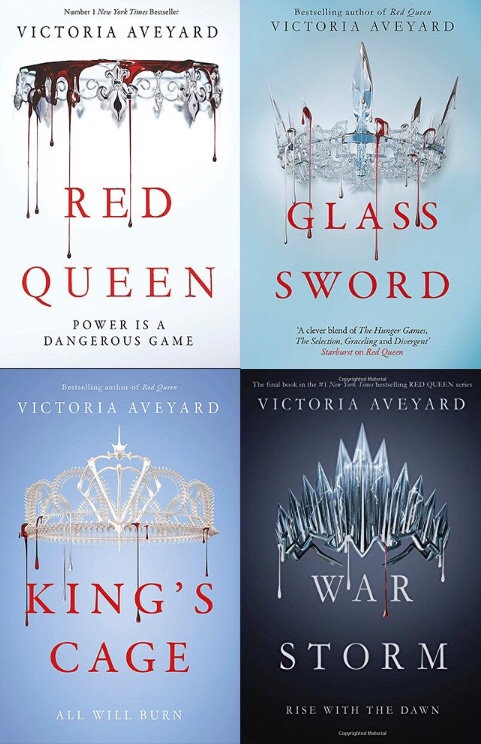 This fantasy-adventure includes all that you could want in a great story: a complex protagonist, and unlikely antagonist, weaponised powers, secret plots, organisations and ‘love’. This book is a gripping page-turner filled with intriguing story arcs, twists and cliff-hangers – you won’t be able to put it down!

The books follow Mare Barrow, in a world where those with silver blood have incredible powers and are apart of the aristocracy; whereas those who are red-blooded are suffering in poverty, without powers to protect themselves. The country has been at war for years with young red-blooded men being sent to die, while silvers indulge in their lavish lifestyles, taking part in banquets and competitions for the hand of the heir to the Kingdom of Norta, Cal. No wonder the rebellious Scarlet Guard arise to fight for equality.

As Mare finds out her best friend is about to be conscripted she plans to steal from a fortunate Silver, however things begin to go terribly wrong. After misfortune strikes the Barrow family once more, Mare turns to mindless theft and in a strange course of events, finds herself with a new job at the King’s residence. It is here, during Queenstrial, the competition for Cal’s hand, that Mare displays unseen power that she was completely unaware of. With powers that threaten the absolutism of the Silvers, Mare is forced to play apart in an elaborate cover up.

As feelings develop and the rebellion brews outside the walls, Mare becomes conflicted between who and what is right for the country and for her. With love, betrayal and incomparable power, will Mare Barrow chose her Silver power, or her Red blood, or both?

Loves this series? Try this book.

This site uses Akismet to reduce spam. Learn how your comment data is processed.